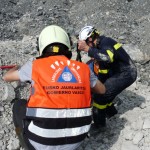 Emergency drill on search and rescue of victims buried under rubble in the quarry of Kobate, in the Garagartza quarters of Arrasate. END_OF_DOCUMENT_TOKEN_TO_BE_REPLACED

Search for a 57-year-old woman missing under the debris of a farmhouse which was destroyed by a propane gas explosion. This explosion caused two people’s death and one person was severely injured.

On May 3rd and 4th we attended a training session on collapsed structures at the Zubillaga fire station. The course was given by Hipólito Poza and Enrique Uriarte.

From 26th to 29th September we attended a training session organised by the Lisbon Fire Brigade on their premises, establishing contacts and discussing different methods used in the training of rescue dog teams.