Course on Communication and Talkie

The members of the G.P.S.Euskadi receive instruction on Communications, focusing on the Tetra System.

On Saturday July 16 we participated in an Orienteering Course with Orux Maps in Elorrio (Bizkaia).

Course on orienteering in Urbasa, Navarra.

During the week-end June 28 and 29 we took part in a course on orienteering  given by  Karlos Laita, in Urbasa, Navarra. END_OF_DOCUMENT_TOKEN_TO_BE_REPLACED

During the week-end 6 to 7 July we participated in a course on cartography and orientation taught by  Karlos Laita  in Lizarrusti, Aralar Mountainrange. END_OF_DOCUMENT_TOKEN_TO_BE_REPLACED 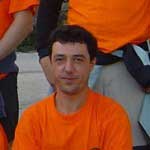 On February 10th Javier Corchero gave us a training course on orienteering. The aim of this course was to maintain knowledge acquired formerly as to cartographic systems and the use of compass and map.

During the week-end November 19th-21st we participated in the orienteering course given by Carlos García in Baraibar in the Aralar Mountain Range.